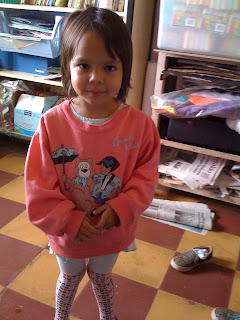 (Racsel has this hand me down dress that is very short, fortunately we found her some stockings to cover her up.)

When I think about updates, its hard to pinpoint huge change and drastic stories every time. So this one will be just a catch up on what has been happening here.


It’s the last month of rainy season, so the ground is very saturated. We have had some tropical weather coming through and a cold front. Its in the 60s (with no heat and a nippy breeze), so my toes and fingers are cold all the time. The rain has not affected my area much, but to the south it has washed out roads and bridges, leaving 70,000 people without homes. There are many sources saying different degrees of disaster, but there are Red Cross tents stationed around town collecting food, clothes and supplies to bring to the south. A fellow missionarycouple and I plan to raise funds to bring down a truckload as well, the beginning of November. I will be sending out an email with details about this. Please pray for the people affected by this disaster as rainy season continues. This is the picture of the road that has washed away by the ministry. Its worse farther up, but I didn't want to take my camera out in the street. 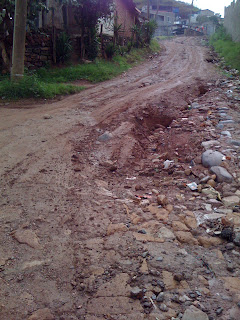 Besides the weather affecting all of Honduras, the ministry is going great. A few weeks ago we nailed down a routine, that we have stuck too and seen much improvement. It’s fun because I get to teach the two different age groups (the bigs and the littles). I love it because the big kids aren’t answering all the questions; each kid gets a turn. I love being with the big kids because they have the basics and are ready to be stretched with a few new things. I love the little kids because they get individual time to repeat and learn, and are absorbing so much. One little boy, Juan Jose, has had a very hard childhood. He is two and has come different times with marks on his body from abuse. His mother also told us she took him to a doctor to find out why he was terrified of baths, and he has also been sexual abused. This explains his behavior to most people. Until the last few weeks, he was not interested in being held, or smiling with his eyes. Its cute, because his verbal is that of a two year old, so when I give him the chance to count or stay the days of the week, he drops the first syllable of every word. The success story is that now he screams out the answers and says them correctly. My jaw drops every time he accomplishes one of the basics because he is so young, has gone through so much, but is very smart. Here is a picture of Juan Jose in a sweater someone madefor the kids. The cut on his chin is a week old bump/ hit from his dad. 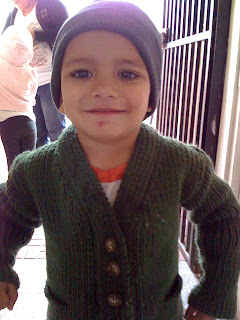 Lastly, it has been a month of staying inside at dark because I don’t have tail lights. The wonderful, great news is that I have the lights in my possession and a friend will install them on Thursday (if there are not glitches in the parts). It has taken some time and unreliable contacts to get this done, so a month later, I should be able to return home after 6pm. Interesting bit of Honduras information, the sun comes up at 6am and goes down at 6pm, since we are so close to the equator.

Other than these events, life and ministry are going on as normal. I have the opportunity to go to a women’s missionary conference this coming weekend. I am very excited for this time of relaxing and renewing.