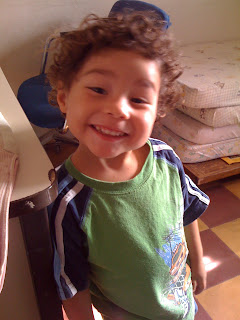 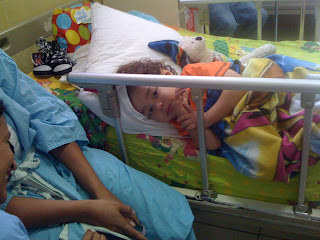 I sent this out on Facebook last week, and then the week got very busy with no time for emails, blogs and communication. Last week Alejandro, 2 years old, went in to get tests run because he wasn’t feeling well. According to his brother, who I interviewed for a video, he thinks his brother is in the hospital for fainting. So I assume he must have fainted and then they started with the testing. A week ago Monday (almost 2 weeks ago) he came at the end of the day with his mom to pick up his brother and cousin, they showed me the bottom lids of his eyes and said the
doctors said he had very bad anemia and were going to run more tests. The next day we found out he had been admitted into the hospital and were running tests for Leukemia. Last weekend we were waiting for the results, and Monday we found out he does have Leukemia, although it doesn’t look like it’s the bad kind, but only time will tell. This past Tuesday we had the chance to go and visit Alejandro and Marcela (his mom) in the public hospital. From what I understand the public hospital is completely free, which is a huge blessing for a family from this community. We had to put on (I’m drawing a blank on the word in English)… smocks/aprons, and we could only stand at his bed for a few minutes because of our germs. Zulema wasn’t able to go in because she had a cold. We prayed for Alejandro and Marcela and got to give Alejandro his birthday present, since he was going to miss our big birthday celebration for all the kids. We went during visiting hours, but it wasn’t a good time for Alejandro. They were giving him more treatment and he was in a lot of pain. His mom said that a group of visitors came with stuffed animals and since Alejandro was in a bad mood, he said he didn’t want one. Then a little while later, he sat up and told them, “I’m going to be in a good mood, I want a stuffed animal now please.” She told me he was also telling his nurses about Miss Jenny and counting for them. I talked to his grandmother yesterday and she said they had to move the IV from his foot to his hand because his foot had swollen up so bad from everything they were putting in him. I will keep you posted, but pray for Alejandro and his family. He turns 3 years old this Wednesday.


Yesterday we celebrated the Birthday’s of all the kids in the ministry. I measured their feet and bought everyone a brand new pair of shoes and a toy, then we loaded up my car and in two trips we went to Popeye’s Chicken. It’s hard to describe or understand that Popeye’s is a huge treat for these kids. We think McDonalds of fast food is just an option when we don’t want to cook. These kids never go to eat fast food because they cannot afford it; they all dressed in their nicest clothes for the trip. The kids loved playing in the play area, eating fried chicken and biscuits. It was funny, the ladies I work with didn’t know what a biscuit was, even as they were eating it. When we got back to the daycare, ready for naptime, we cut a birthday cake and opened presents. It was very hectic, but the kids enjoyed celebrating their birthdays! Thank you to everyone who helped make this possible. If you would still like to donate specifically for the birthday party, please let me know. 12 out of 20 kids were sponsored for this party ($25 per kid), so the rest came out of my monthly budget. God has always provided, so I was not concerned about sacrificing for this special day, but pray about if you would like to give to this specific event. I was planning on sending out this blog earlier in the week, but with looking for shoes and toys in over 10 different stores, and 3 migraines this week, the blog was not written until Saturday night.


Please continue to pray for my health. I’m finally back to eating normal from the stomach sickness, but the headaches the past two weeks have been very frequent. Also pray for my preparation and travels for furlough. I will be connecting with supporters and traveling all over the States. Thanks for your prayers, encouragement, and support!!
Posted by Jenny at 10:16 PM